Raising Stakes is a story about screenwriting.

Three writers who are about to miss the deadline for the first draft of a script are locked by the producer in the writing room and they cannot leave until they finish. The three writers are: Jerry – coffee and cigarettes addict and dust fearer. He just wants to smoke a cigarette and have some coffee, things he cannot do before finishing the first draft of that script. Alicia – Writer and cat lover. She’s the mediator type and there’s plenty of work for her in the room. She wants to get the work done so she could go home to her cat. Mike – Very chilled and lazy, expensive car lover and owner. Sometimes he unexpectedly comes up with brilliant ideas. They have to do it without the head writer. To make it even more personal for each writer, the producer sends them threatening messages (one for each) on DVDs under the locked door. In the end they have to pitch the script to their very own head writer and producer. 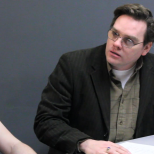